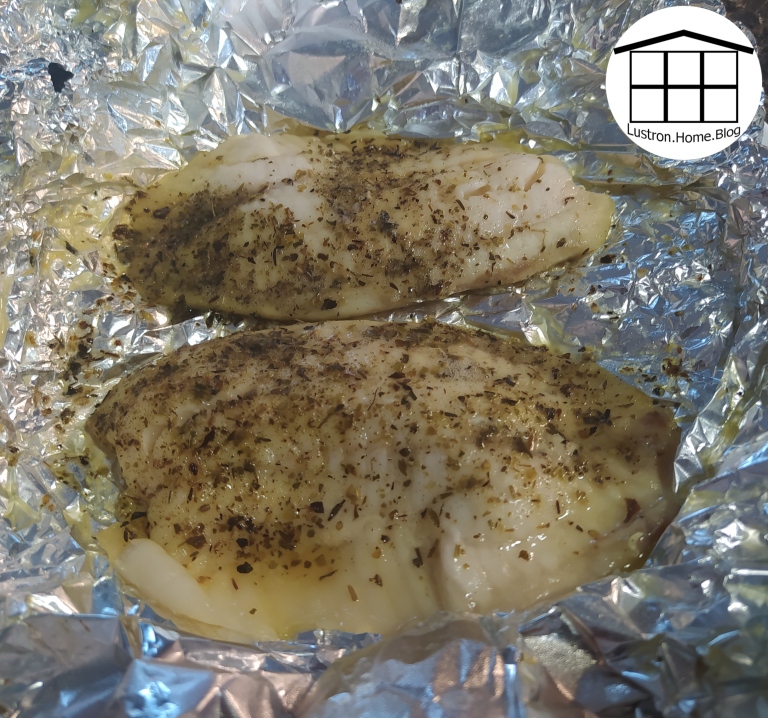 Tilapia is a great fish for those that don’t like the fishy flavor. Tilapia is also very healthy and adds very little fat to your diet. This recipe makes a delicious flavorful fish that has the added flavor of the herbs and fats of butter. You could substitute butter for coconut oil or avocado oil, you’d just need to add a small pinch of salt to help with flavor. Italian seasoning also consists of marjoram, oregano, thyme, basil, sage, rosemary, and parsley. Zucchini is a plant where you only have to plant a couple, and soon you’ll be up to your nose in fruits! I didn’t grow up with zucchini, and I’m not a big fan of their texture. Because of this, when I get them, I have to come up with creative ways to try and enjoy them. This was of preparing zucchini was pretty good. I enjoyed it and made me think zucchinis aren’t that bad. It you aren’t a big fan of zucchinis, this is a good opportunity to try them with a different flavor and texture!

Nothing says summer quite like peach cobbler. Served warm or cold, the sweet peaches are complimented perfectly by the sweet and buttery batter. This cobbler has a cake like consistency, and the peach flavor is pervasive thanks to the peach syrup. Serve it plain, or top it with whipped cream or ice cream. This recipe makes 8-10 adult sized servings.

As one of the meals I had a lot growing up, I find this dish to be nostalgic. Baking the chicken in italian dressing is a simple way to impart flavor into the chicken while also being a fast way to add the flavor. I was able to use the leftover italian dressing from my cucumbers in italian dressing. You can use any cut of chicken you like, I’m just used to either a breast or tenderloins. This dish can easily be made in bulk as well if you have many mouths to feed and stomachs to fill.

Hello, and welcome to another one of my garden updates. My last update was for May, and this one is for June. (Sorry it’s a bit later than the last one.) My garden has grown so fast, it’s shocking! I’ve gotten some radishes and lettuce off my plants, and this weekend I was able to get some cucumbers off my plants too.

This last month I’ve learned some valuable lessons. First, and I mentioned it in my last post, it is so important to space radishes. I tried to get them high density, just it just grew into a mess, and it took about 2 weeks longer to get any. Also, the two pictures below of harvested radishes is all the radishes I was able to harvest out of that mess. I had several radishes break under the soil and begin to rot, and I had many many more that produced no bulb due to overcrowding.

Second, I’ve discovered that cucumbers are a handful! I’ve been trying to grow them vertically, tying them to a tomato cage. And, though that works, They don’t climb naturally well, so I find myself every 1-2 days in the garden directing and tying off my cucumber plants. I also trimmed off some of the lower leaves off my cucumbers. They were turning yellow and dying, and they were also restricting air flow and making it hard to see any low hanging cucumbers.

Third, I learned all spacing needs to be respected more. I planted my green beans and cucumbers about 18 inches apart, and you’d swear they are star-crossed lovers. I go out into my garden everyday, and I always see these two plants reaching for one another, and being less than an inch from becoming a tangled mess I don’t look forward to dealing with. However, my other bed of lettuce, Swiss chard, tomatoes, and onions aren’t having any crowding issues. My Swiss chard didn’t come up. I believe I waited too long to plant. I also planted another segment of lettuce, and that also didn’t come up, I’m assuming same problem. My onions in that bed have appeared to stop growing. They are tinier than the other bed despite being planted earlier. They tops have also begun to fall over on several in that bed, leading me to believe pour drainage is likely a problem. I have several tomatoes that are nice and big, however none have begun to turn red yet. I also have one that a bug got into, but that’s not bad.

Fourth, I’ve learned good soil and drainage is important. As I just mentioned, my one bed isn’t holding onions, and I’m positive that if it isn’t holding onto moisture too much, the soil is likely not giving them enough nutrients. This bed was filled with mostly decomposed mulch, so the soil isn’t as good as my other bed. Besides that, the fabric bags we filled using soil from my in-law’s house, and their soil has a very high clay content. Because of this, in the hot June/July weather, I have to go and water them about every other day, when I see the leaves really wilting.

I’ve gotten everything planted and going. Some things aren’t growing as well as others, but I’m learning. We got a peach tree about 2 weeks ago and got that into the ground. I also left a few radishes to go to seed, and I have 2 onion sets going to seed now.

Ive also fertilized my soil about 3 times. I’ve been using Miracle Grow plant food for vegetables. Between that, watering regularly, and all the warm weather, my veggies have grown so fast!